Beyond: Two Souls Was Beyond My Skill 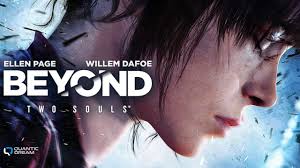 Or that’s how I felt, at least, when I failed–repeatedly–to input the right commands during the fight sequences. But we’ll get to that–let’s start from the beginning.

Beyond: Two Souls is another interactive drama and action-adventure game for the PlayStation 3, PlayStation 4 (I played it on PS4) and Microsoft Windows from David Cage and Quantic Dream. This dynamic team brought us other immersive, interactive drama and action adventure games like Indigo Prophecy (Fahrenheit), Heavy Rain, and Detroit: Become Human  all of which are very good (if you enjoy this genre of game) and worth checking out of you’ve got a lot of time on your hands because of, well, COVID-19.

Beyond: Two Souls tells the story of Jodie Holmes, (adult/teen Jodie is played by Ellen Page who does a kick-ass job) a woman who is literally linked to a mysterious spirit named Aiden. The story follows her from childhood to womanhood as she deals with the weirdness of having a (very capable) spirit companion with whom she shares a  complicated relationship.

Jodie grows up under the watchful eye of the United States Department of Paranormal activity under the tutelage Dr. Nathan Dawkins (Willem Dafoe) and Cole Freeman (Kadeem Hardison). During this chapter of her life, she learns the bounds of her amazing powers while struggling with the horrors of young adulthood. She then goes to work for the CIA, using Aiden to aid them in their quest to create a link to the “other side”.

The CIA, of course, is full of douches that use her for their own devices with little regard for her safety, sanity, or the viability of opening up a portal to the spirit world (spoiler alert, their attempts go awry) and Jodie, with Aiden’s help, is constantly working to clean up their ghostly messes.

Despite some reviews I read that said different, Beyond: Two Souls has an appropriately intricate and interesting plot and it is every bit a cinematic juggernaut on par with the rest of Cage and Quantic Dream’s work. The game play here is a bit more complex than that of Indigo Prophecy or Heavy Rain, though you can adjust difficulty according to your comfort level.

I chose the “experienced” level and felt pretty confident about my choice–and then came the fighting mechanics. It’s set up like this: Jodie’s body or body part moves, in slow motion, in any given direction on the screen and you’re supposed to move the right joystick in that direction. I sucked at this.

During the 10-second or so slow motion moments it’s up to you to determine which direction Jodie’s swinging, ducking, or kicking. This literally kicked my ass. I kept rolling into punches, ducking when I should have been jumping to the side, punching to the right when I should’ve been punching to the left. Overall I got my ass kicked in about 75% of the fights. Lucky for me, I was still able to get through the grueling action sequences even though Jodie was always worse for wear. I sported a lot of bloody noses, busted lips, and limped while holding my arm a lot.

Needless to say, I performed below par and as a very seasoned gamer, I’m ashamed to admit it.

As is typical when I suck at some component of a game, I looked up reviews on the game to see if other people had this same problem with the fight mechanics. Phew! They did.

So the moral of this story is, check out Beyond: Two Souls, because I was able to love it despite its relentless mission to take me down in peg in my gaming prowess. I mean, you get to possess people (Aiden’s abilities essentially make you a bad ass–with Aiden’s help, you can fly and heal people, for example) fight smoky evil entities, kiss men (or not if you so choose) and kick ass — but be warned that the fighting mechanics kind of suck. Don’t agree? Think I’ve got a mouthful of sour grapes? Try the game and let me know if you had the same experience I had–which was a good one, overall.