The Absolute Ecstasy of Mass Effect 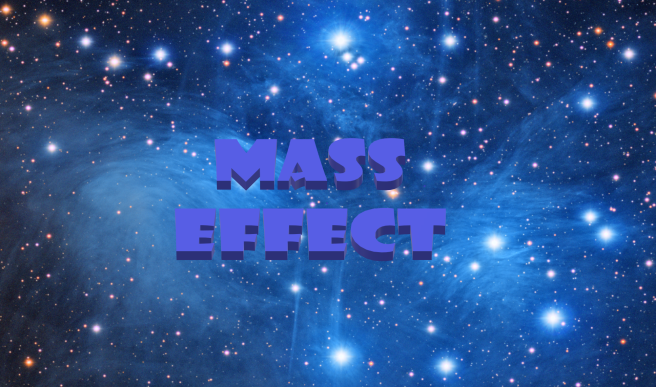 As an ardent Bioware fan, I play through the entire Mass Effect series once a year and I’m in the middle of my 2020 play-through as we speak.

Mass Effect tells the story of Commander Shepherd, an Alliance fleet hero who is charged with (of course) saving the Earth from a species of “old-machines” called the Reapers who exist to eliminate organics.

Each installment centers around Shepherd fighting the Reapers and whatever agent they’ve recruited to do their bidding. In the first installment, it was the rogue Spectre, Saren (with a special appearance by the Geth), in Mass Effect 2, it was the Collectors (and, of course, the Geth), and in Mass Effect 3, it was the Reapers and their favorite mindless slaves, the Geth. Really, the Geth are always around causing trouble and being completely vulnerable to tech attacks (yay!).

Currently, I’m admiring the crown glory of the series, Mass Effect 3, which signifies the complete evolution of the series up to that point in its improvement on less than stellar elements of the first two installments.

I played the series out of order as the inaugural installment of Mass Effect wasn’t readily available on PS3 when I learned about the series. My first introduction to this space-age opus was Mass Effect 2, which was a vast improvement on the first in the series–mostly because you didn’t have to drive around in the awkward M35 Mako on every mission. No, in MS2 you just had to spend countless hours scanning planets for mineral deposits that didn’t really tip the scale in the game that much after a certain point–yet I did this a lot because I’m a rabid completionist.

Overall, I cannot tout the absolute perfection of this series enough–and without reservation–I consider the entire series to be an impeccable epic of space kick-assery — let me make that clear for those who have numerous complaints about the ending, or about this, or about that. Many fanboys crucified the game’s final installment, Mass Effect: Andromeda, effectively torpedoing the series based on their claims that it didn’t live up to their standards. I’d like to see these same fanboys deliver on-point gaming caviar after four installments. At that point, I’m sure we can all agree that anything can jump the shark.

What I love about Mass Effect is that its setting goes beyond the well-worn depiction of a pseudo-medieval/renaissance environment, which I am entirely tired of. I play a lot of RPGs, and since turn-based RPGs have, from a mainstream standpoint, gone the way of the Dodo, I tend to play a lot of Action RPGs that are mired in dreary castle-dom and armor and scabbards and the like. Don’t get me wrong, I love Skyrim, Witcher 3, Dragon Age (another AMAZING Action-RPG series by Bioware), Fable, Dragon’s Dogma, etc. but I’m a little tired of  seeing dragons, elves, castles, kings, etc. as the overarching theme of  RPGs/Action RPGs.

To put it simply, I’m a bitch that loves space.

There’s a lot to love about this game, but the Simmer in me (I’m playing the Sims 4 right now as well) particularly enjoys the in depth customization options available for you to create your unique hero in Shepherd. It’s no secret that being able to personalize your main character allows for deeper immersion in a game, and Mass Effect has that in spades. Check out some video of my kick-ass purple-haired maven, Prism Shepherd, below.

Otherwise, the game is gritty and more than sates my shooter appetites (it’s a great third person shooter). Like Dragon Age and the two installments before it, Mass Effect 3 has a relationship development engine (though it’s a bit less in depth in MS3) and includes lots of cursing, skimpy clothing, sexy aliens, and depending on what difficulty you choose, some very deadly, asshole-ish baddies. I mean what more  could you want?

So this is an ode to one of my favorite RPG/Action RPG series. Mass Effect is keeping me entertained during this quarantine horror show, and I’ve dropped some game play footage below for your enjoyment.

Check out Mass Effect, it’s good for you.

Prism Shepard and “ally” geth Legion discuss the current state of things during a cut scene.

Wonder what it would be like to shoot cubes in a Tron-like Geth mainframe? Well, you’ll wonder no more after playing Mass Effect 3!

There could be spoilers here about Netflix’s stab at the popular manga/anime series, Death Note. I write these things via stream of consciousness so I don’t check for loose lips, only glaring errors. So, perhaps, SPOILER ALERT.

I’m not going to pretend I read the Death Note manga, nor have I seen the anime series, so my opinion is based on watching it without knowing anything about it.

In summary, without giving too much away, the main character, Light Turner, finds a way to dole out just deserts with the flick of a wrist–with horrific results.

I read a review calling it the “worst movie” the reviewer had ever seen, so needless to say, I was intrigued.

Now I’m sure we all know by now that for every binge-able most-watched Netflix series, there are like ten awful ones that you wish you could erase from your viewing history. I knew this had potential to be pretty bad, so I dove right in.

I pick movies apart for a living. Or, I live to pick movies apart, either way, I was waiting to do this and I missed my chance because I became interested in the movie. Willem Dafoe’s Ryuk is both frightening and funny–and Willem’s voice was made for this guy.

Nat Wolff’s Light Turner grew on me. At first, I didn’t think I’d be able to stomach his emo hair and his overall affect, but that grew on me quickly. Add in a deliciously evil Margaret Qualley as Mia Sutton/Kira, and you’ve got a pair of homicidal teens with hearts of gold.

It wasn’t something you write home about, but it was entertaining, a little bit scary, and very interesting–in no small part thanks to the ubiquitous Lakeith Stanfield who is the perfect eccentric super-detective with a troubled past and razor sharp instincts.

Now, I’m tempted to go watch the Death Note anime to see what the fanboys (I’m guessing the people who hate the Netflix rendering are fanboys, or fanpeople?) are talking about. It’s probably same old same old: “they left [insert character] out of the Netflix version! Burn their houses!” Or, “in the manga/anime, the detective character was white!” Yawn.

As a standalone quickie don’t think too much movie, it was perfect. Also, it kind of had a Heathers feel, and I love that movie, don’t you?

It’s not easy. I learned a long time ago that having endless time on your hands can be a burden.

With that said, I’ve been more productive than ever, churning out writing samples, working on my sci-fi series, and gaming only a little.

Speaking of gaming, in the spirit of being productive, I’ve managed to play endless hours of Mass Effect 2 (I’m being funny here) and have used it as a form of meditation (seriously).

I do true meditation, you know, sitting immobile in my favorite chair, calming my racing thoughts, but what people don’t realize (or maybe they do and I’m late to the game) is that intense focus on ANY activity can be meditation. So by that logic, watching Midsommer last night was intense meditation practice. Too bad the movie is so weird I was troubled for the rest of the evening.

How are you keeping busy during this uniquely horrific time?